Off the Square Theater Company’s Matilda

Off the Square Theater Company’s Matilda 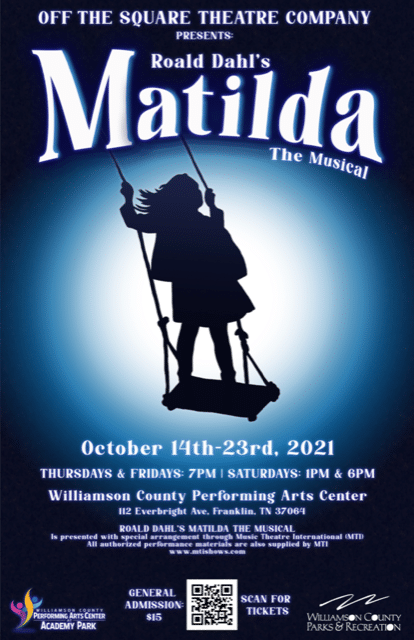 Inspired by Roald Dahl’s beloved children’s novel, Matilda The Musical revels in the power of imagination and the inspiring story of a girl who dreams of a better life. Matilda is a little girl with astonishing wit, intelligence, and psychokinetic powers. She’s unloved by her cruel parents but impresses her schoolteacher, the highly loveable Miss Honey. However – the school’s mean headmistress, Miss Trunchbull, hates children and just loves thinking up new punishments for those who don’t abide by her rules. But Matilda has courage and cleverness in equal amounts, and could be the school pupils’ saving grace! Packed with high-energy dance numbers and catchy songs, children and adults alike will be thrilled and delighted by the story of the special little girl with an extraordinary imagination.

Off the Square Theater Company has been bringing magic to the stage since 2015. In their aim to be a Christ centered, family, and community oriented theater company, they have produced several memorable musical theater productions such as the Wizard of Oz, Peter Pan, and Annie. Coming back for its ninth production, OTS is thrilled to present Matilda the musical!