Most Americans are familiar with the Pilgrim’s Thanksgiving Feast of 1621, but few realize that it was not the first festival of its kind in North America. Long before Europeans set foot in the Americas, native peoples sought to insure a good harvest with dances and rituals such as the Green Corn Dance of the Cherokees.

The first Thanksgiving service known to be held by Europeans in North America occurred on May 27, 1578 in Newfoundland, although earlier Church-type services were probably held by Spaniards in La Florida. However, for British New England, some historians believe that the Popham Colony in Maine conducted a Thanksgiving service in 1607 (see Sources: Greif, 208-209; Gould, and Hatch). In the same year, Jamestown colonists gave thanks for their safe arrival, and another service was held in 1610 when a supply ship arrived after a harsh winter. Berkley Hundred settlers held a Thanksgiving service in accordance with their charter which stated that the day of their arrival in Virginia should be observed yearly as a day of Thanksgiving, but within a few years an Indian uprising ended further services (Dabney). Thus British colonists held several Thanksgiving services in America before the Pilgrim’s celebration in 1621.

The Pilgrims, with a puritanical rejection of public religious display, held a non-religious Thanksgiving feast, aside from saying grace. In fact, they seem to have used the three days for feasting, playing games, and even drinking liquor.

In 1623, the Pilgrims at Plymouth Plantation, Massachusetts, held another day of Thanksgiving. As a drought was destroying their crops, colonists prayed and fasted for relief; the rains came a few days later. And not long after, Captain Miles Standish arrived with staples and news that a Dutch supply ship was on its way. Because of all this good fortune, colonists held a day of Thanksgiving and prayer on June 30. This 1623 festival appears to have been the origin of our Thanksgiving Day because it combined a religious and social celebration.

Festivals of Thanksgiving were observed sporadically on a local level for more than 150 years. They tended to be autumn harvest celebrations. But in 1789, Elias Boudinot, Massachusetts, member of the House of Representatives, moved that a day of Thanksgiving be held to thank God for giving the American people the opportunity to create a Constitution to preserve their hard won freedoms. A Congressional Joint Committee approved the motion, and informed President George Washington. On October 3, 1789, the President proclaimed that the people of the United States observe “a day of public thanksgiving and prayer” on Thursday, the 26th of November.

The next three Presidents proclaimed, at most, two days of thanksgiving sometime during their terms of office, either on their own initiative or at the request of a joint Resolution of Congress. One exception was Thomas Jefferson, who believed it was a conflict of church and state to require the American people hold a day of prayer and thanksgiving. President James Madison proclaimed a day of Thanksgiving to be held on April 13, 1815, the last such proclamation issued by a President until Abraham Lincoln did so in 1862.

Most of the credit for the establishment of an annual Thanksgiving holiday may be given to Sarah Josepha Hale. Editor of Ladies Magazine and Godey’s Lady’s Book, she began to agitate for such a day in 1827 by printing articles in the magazines. She also published stories and recipes, and wrote scores of letters to governors, senators, and presidents. After 36 years of crusading, she won her battle. On October 3, 1863, buoyed by the Union victory at Gettysburg, President Lincoln proclaimed that November 26, would be a national Thanksgiving Day, to be observed every year on the fourth Thursday of November.

Only twice has a president changed the day of observation. President Franklin D. Roosevelt, in order to give depression-era merchants more selling days before Christmas, assigned the third Thursday to be Thanksgiving Day in 1939 and 1940. But he was met with popular resistance, largely because the change required rescheduling Thanksgiving Day events such as football games and parades. In 1941, a Congressional Joint Resolution officially set the fourth Thursday of November as a national holiday for Thanksgiving.

Today, Thanksgiving is a time when many families come together, and many churches are open for special services. We have both Native Americans and immigrants to thank for the opportunity to observe a day of thanksgiving.  For more information, visit http://www.si.edu/Encyclopedia_SI/nmah/thanks.htm. 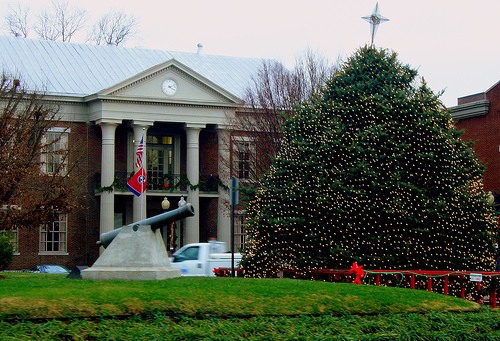