NASHVILLE – An all-star team has been assembled for the upcoming STUDIO TENN THEATRE COMPANYand THE TENNESSEE PERFORMING ARTS CENTER (TPAC) production of ELTON JOHN & TIM RICE’S AIDA: IN CONCERT for two nights at TPAC on September 30 and October 1, 2022.

With a rich score of Elton John music driving the enduring story of love, war and betrayal, the production will be directed and choreographed by Broadway’s Gerry McIntyre, a Broadway stalwart with credits including Joseph and the Amazing Technicolor Dreamcoat and Chicago. The shows will be co-directed by Studio Tenn Artistic Director, Patrick Cassidy, the beloved stage and screen veteran. 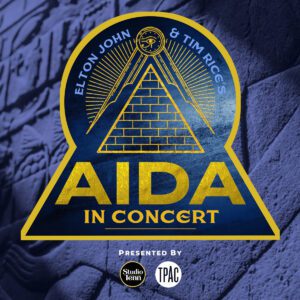 “The talent level is simply amazing – it’s a star-studded cast from New York, Los Angeles and Nashville,” said Cassidy. “We’re especially excited for Maya to take the James K. Polk Theater stage in her hometown – she’s mesmerizing and I know will make a lasting impression on showgoers. To put her alongside Rex, Jackie and John creates a dynamic and powerful experience.”

Riley, a graduate of New York University Tisch School of the Arts, has performed in a variety of roles across the globe, including Ragtime, Cymbeline, Gem of the Ocean and Godspell. Smith as been a staple in Broadway productions for years, and has a long list of TV and feature film credits as well. Burns’ distinguished career includes the title of Broadway’s longest running Elphaba in Wicked – in fact, she is the face of the Wicked brand. Hall was a regular on the hit TV series, Glee, and has written and performed with a wide-ranging list of global superstars including Childish Gambino, Celine Dion, Florida-Georgia Line, Josh Groban and even Michael Jackson.

Shows start at 8:00 p.m. on both September 30 and October 1. Single tickets are on sale now on both the Studio Tenn and TPAC websites (link to tickets here). Tickets for the entire Studio Tenn 2022-23 season can be purchased in a four-show season package on the Studio Tenn website. More information about TPAC’s Broadway Series is also available on TPAC’s website.

Winner of four Tony Awards, ELTON JOHN & TIM RICE’S AIDA: IN CONCERT is an epic tale of love, loyalty and betrayal, chronicling the love triangle between Aida, a Nubian princess stolen from her country, Amneris, an Egyptian princess, and Radames, the soldier they both love.

The enslaved Nubian princess, Aida, finds her heart entangled with Radames, an Egyptian soldier who is betrothed to the Pharaoh’s daughter, Amneris. As their forbidden love blossoms, Aida is forced to weigh her heart against the responsibility that she faces as the leader of her people. Aida and Radames’ love for one another becomes a shining example of true devotion that ultimately transcends the vast cultural differences between their warring nations, heralding a time of unprecedented peace and prosperity.

The show was originally produced by Disney Theatrical Productions and directed on Broadway by Robert Falls. Music is by Elton John with lyrics by Tim Rice; the book is by Linda Woolverton, Robert Falls and David Henry Hwang.

Studio Tenn is a professional regional theatre company and a 501(c)3 nonprofit organization based in Franklin, Tennessee. Its programming centers around innovative, custom-designed presentations of classic plays and musicals as well as an original “Legacy” series of theatrical concerts celebrating the work of time-honored musicians. Studio Tenn exists to captivate and inspire with Broadway-quality musicals, plays, and concerts while educating the next generation to create and delight in the experience of live theatre.

About The Tennessee Performing Arts Center

TPAC champions excellence in the performing arts and arts education, fosters support for our resident companies and community partners, and serves as an inclusive place for all to enjoy meaningful and relevant experiences that enrich lives and promote economic vitality. The nonprofit Tennessee Performing Arts Center®, located in downtown Nashville, is dedicated to providing and supporting the presentation of the performing and cultural arts. Founded in 1980, TPAC® serves several hundred thousand audience members each year. Performances include the HCA Healthcare/TriStar Health Broadway at TPAC series, a variety of special engagements, and the productions of three resident artistic companies – Nashville Ballet, Nashville Opera, and Nashville Repertory Theatre. In addition, TPAC administers one of the largest and most comprehensive arts education programs in the United States, serving students from pre-school to high school, educators, and adults. Over almost four decades, TPAC has welcomed more than 14 million audience members and served more than 1.8 million students, educators, and adults with performances at TPAC, teacher resources, professional development opportunities, classroom residencies, and enrichment programs. TPAC manages three performance venues in the James K. Polk Cultural Center – Andrew Jackson Hall (2,472 seats), James K. Polk Theater (1,075), and Andrew Johnson Theater (256) – and War Memorial Auditorium (1,661), a historic concert hall located across 6th Avenue from the center.