This weekend was the first weekend since 1936 that the Franklin Cinema was not open.

On Jan 7, the Cinema hosted its final movies, Charlotte’s Web and Night at the Museum.

The Franklin Cinema was more than just a movie theatre. It was a place of memories for many Williamson County residents and a large part of the community.  The Franklin Cinema served more than the average movie concessions; guest could have pizza and a pitcher of beer while they watched movies. Having attended movies at the Franklin Cinema for over 20 years, I must say that I was quite sad to see it close. It is a though a huge part of downtown Franklin has disappeared and all that remains of the once lively and fun building is a dark, empty structure in its place. 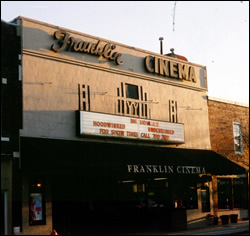 Williamson County residents fought a hard fight to keep the Cinema alive.  On Nov. 29, there was a block party in an effort to save the Cinema. Approximately $19,000 was raised. The Heritage Foundation, which specializes in preserving historical landmarks in Williamson County, is using this money for a real estate appraiser, theater consultants from the League of Historic American Theatres, and an accountant who specializes in historic preservation tax credits.

Currently, the Heritage Foundation is not actively fundraising but that might change.

Williamson County residents, I hope that we will find some way to bring back this theatre. If you have any ideas of how we could buy back our Cinema and let it continue to be a place that builds memories for years to come, I encourageyou to e-mail your ideas to the staff at Franklin Is.com at contact@franklinis.com.

Finally, I will leave you with a quotation from our former President Franklin D. Roosevelt, “It is common sense to take a method and try it.  If it fails, admit it frankly and try another.  But above all, try something.”